First was Tim Tebow. Now, we have another retired Super Bowl winner wanting to come back to the pros and play again. For those who want to be an online bookie, this seems unimportant. But if teams will hire players like this, rankings and outcomes will definitely be different. In our latest football news, we’re taking a look at Brandon Jacobs, who is planning an NFL comeback.

Jacobs, who has been retired for the past 8 years, plans to return to the NFL. Jacobs officially made this announcement last May, as sportsbook pay per head bookies remember well. And while only the keen ones were able to remember this, some teams are actually considering him. 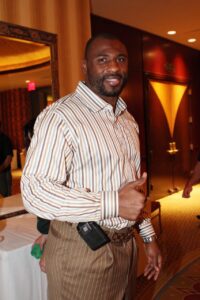 Brandon Jacobs has been working hard the past month to get into shape. Jacobs is a former Giants running back. He also has 2 Super Bowl wins under his belt. Jacobs plans to switch to defensive end. And, as surprising as it sounds, he says that three NFL teams have already gotten in touch with his agent. Many bookie pay per head operators will be on the watchout for this development. Jacobs cannot mention who these three teams are. He also says that it will be fine if he will not get an opportunity. After all, Jacobs is happy with what he is currently doing. The 38 year old running back currently coaches a high school team and also runs a youth football program.

But, as old as some would say he is for the sport, Jacobs thinks that he can be a great defensive player in the league. For those who do not remember, Jacobs has a record of 11 solo tackles when he was still playing. He also has rushed for 5,094 yards, and has a franchise record of 60 touchdowns. So, we perfectly understand why teams would be interested to see what Jacobs can offer.